Travels on the Silk Road

Canon Masters Jackie Ranken and Mike Langford travelled to China to explore the vast culture and surrounds of the ancient Silk Road between China and the Mediterranean.

They shared with us a selection of images from their trip, the story behind each shot, and the gear and settings used to capture the moment.

For me travel isn’t just about the destination, it’s also about the travel to and from those destinations. I’m always on the look-out for things that communicate to others what I’m doing and where I am.

We were travelling on an overnight train between Xian and Jiayuguan late last year, on the first part of our China Silk Road journey. I really liked the motifs of the camels on the curtains in our train compartment, as in a way we were on a modern-day camel crossing the desert of the ancient silk road. This image reminds me of that part of the journey. I also like the stark contrast of the stainless-steel utensils on the table. 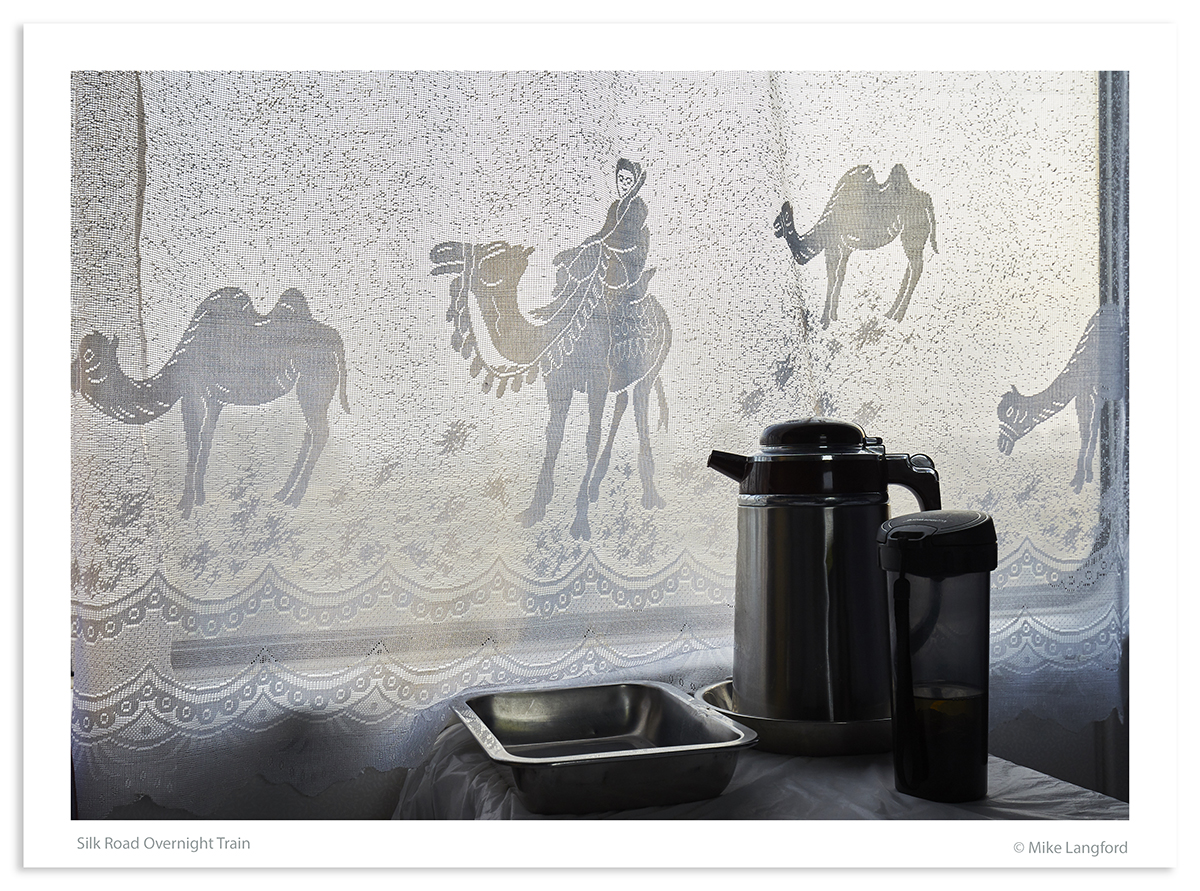 Danxia Landform, is a geological phantasmagoria of different rock layers all stacked together in a valley only a few kilometres in length. The valley is much more colourful than we expected, which is obviously why it has been coined the name ‘The Rainbow Mountains’ and is listed as one of the top ten geological sites in the world. Photographing it was very hard, as it was difficult to give it scale as well as to make the colours appear real. By including the road mirror in the bottom of the image, I was able to create a sense of scale. You can also see a road at the top left of the image as well as a couple of look-out points, which also help with the scale. Instead of oversaturating the scene to bring out the colour, I just increased the contrast to +4, which separated out the tones as well as the colour. I did this in the cameras Picture style under the Landscape setting. 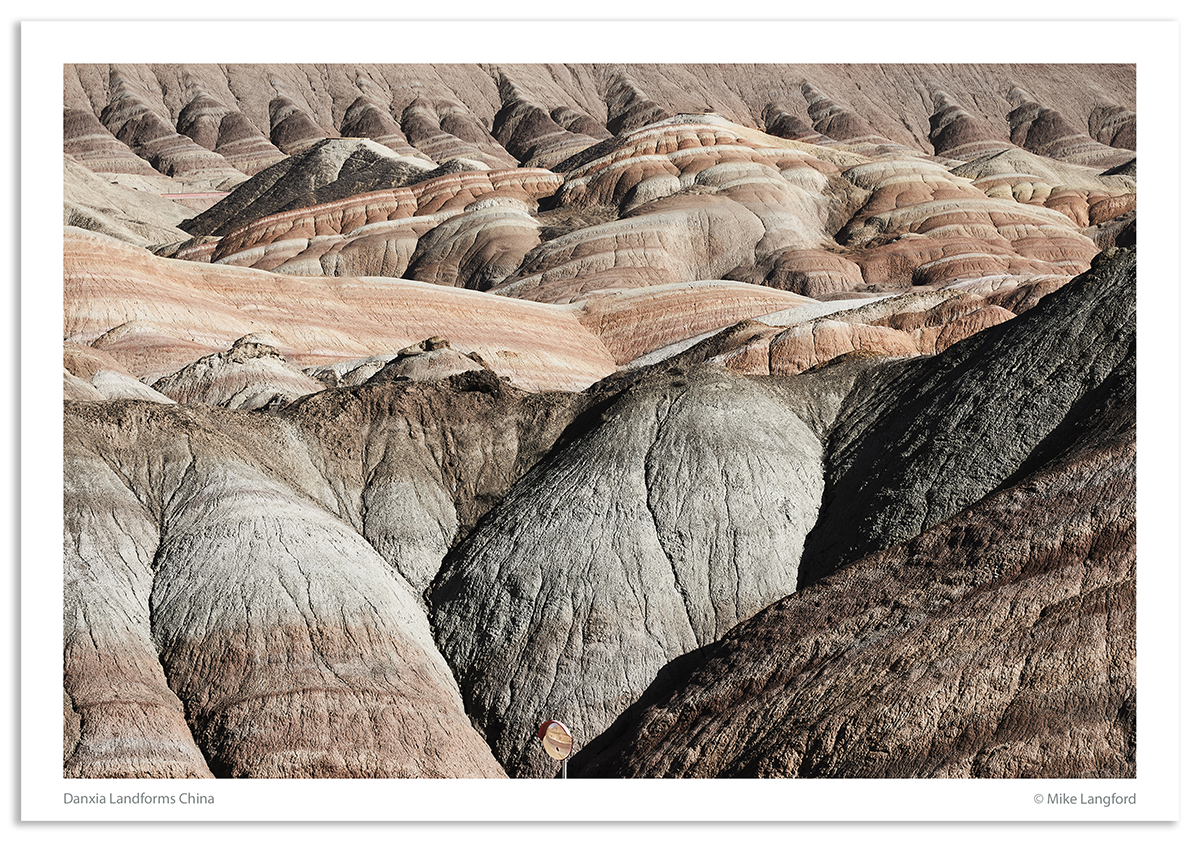 We were on the very edge of the Taklimakan looking for wild Bactrian camels the area is famous for but instead I came across this lone Chinese man standing the top of a sand dune, looking out into the desert. Off in the distance, were hundreds of tracks of footprints leading up and around the distant dunes. By using my 100-400mm lens I managed to make this man look like he was the center of his universe. The background sand dunes almost look like clouds as they are a different colour to the dune he is standing on. This is because of the blue haze of the desert, which is amplified using the long lens. 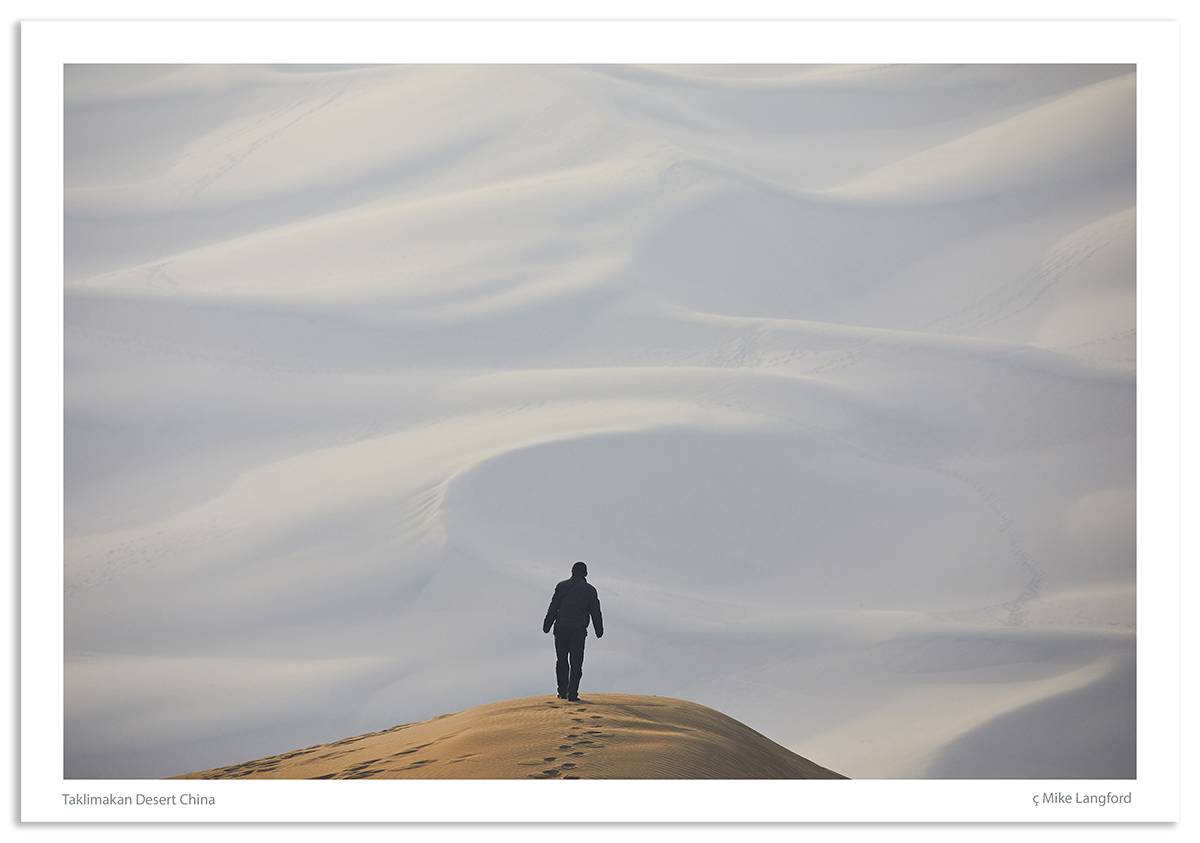 I love photographing during times of mixed lighting – which is when natural daylight and artificial street lights blend together creating a vibrant mix of colour. The Canon 5D Mark IV has almost no noise at ISO 1600 and so I could easily to hand hold and freeze this image of two girls walking past the door of a Mosque in this beautiful light. Had I used a slower shutter speed and been on a tripod, the movement of the girls would have created a blur, which I didn’t want. Being able to now use high ISOs to capture low light situations has changed the way I photograph scenes like this. 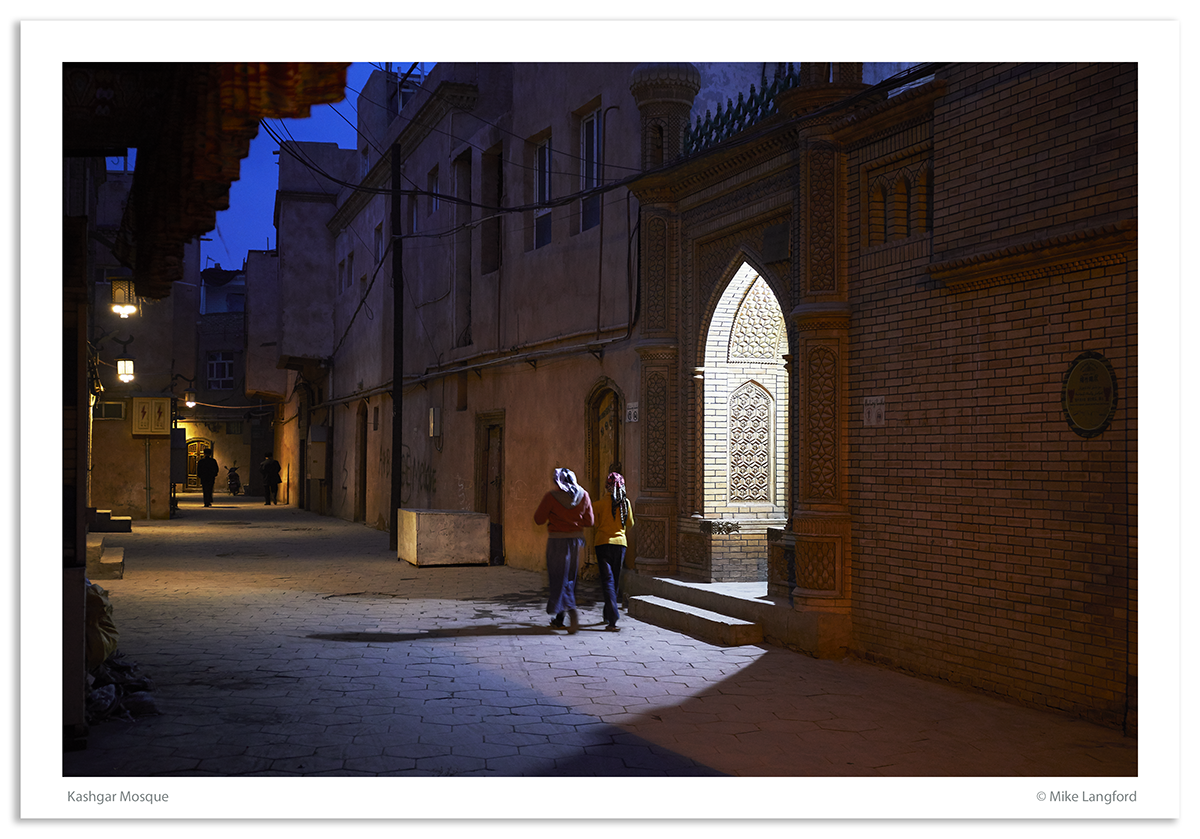 Using a long lens to capture this image of the donkey cart and driver at the Kashgar Sunday market has helped isolate him from the background but at the same time shown where he is. Shooting with an aperture of f/8 has given me a deep enough focus to keep both the donkey’s nose in focus as well as the driver. This has also given me the sharpest image possible with this lens.

The difficulty to photographing in busy places like markets to being able to isolate the subject of the image so that the viewer knows what to look at. 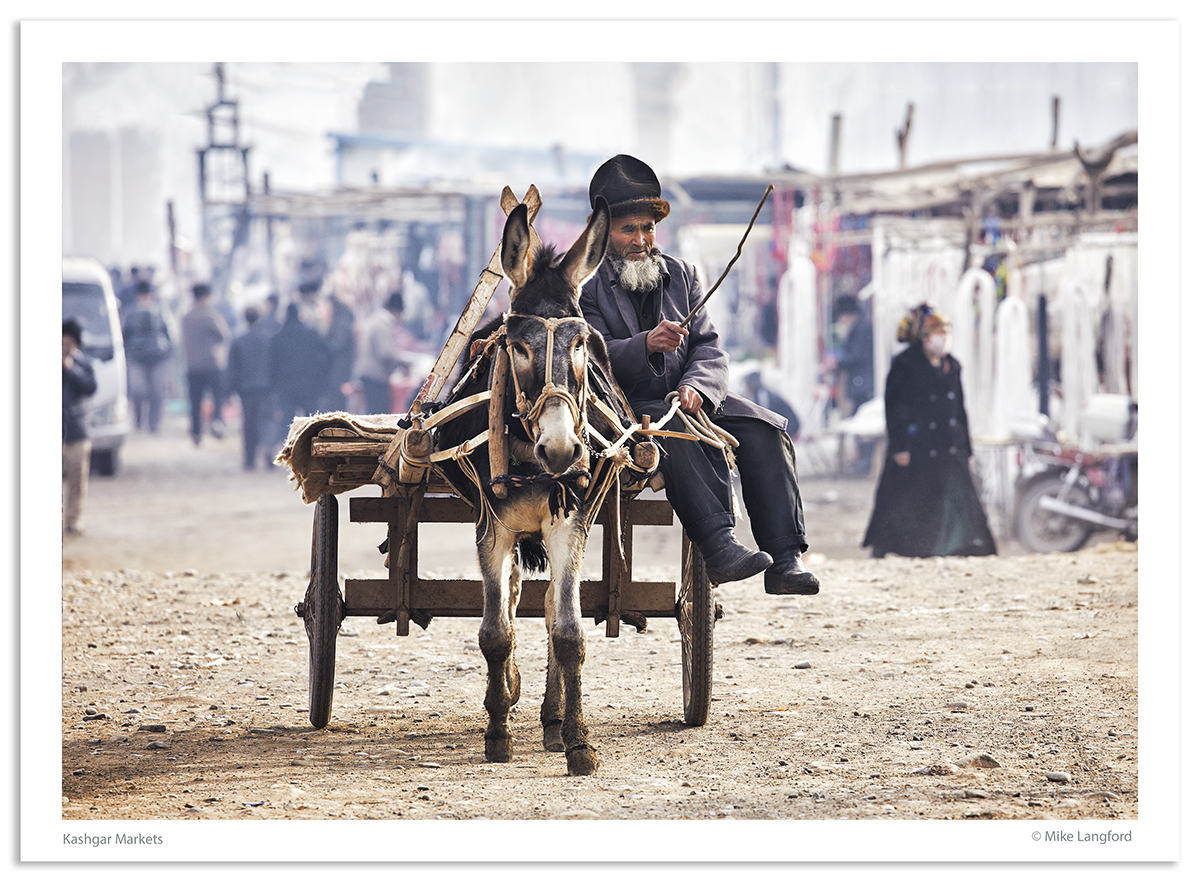 A travel photograph can be found at any time of the day while participating in all sorts of activities. This image was made while visiting an old sector of Beijing where the buildings have been restored to what they looked like many hundreds of years ago. Before leaving the precinct, I made a visit to the public toilet. It was winter and the outer door was covered in a thick heavy plastic door to keep the heat in. I was on my way out of the building to catch up with the group when I saw this image.

The technique is pretty simple. To keep the whole image in focus I shot square to the surface of the transparent plastic door and used an aperture of f8 to give me a depth of focus that made the interesting silhouette of the tree reasonably sharp.

My exposure settings were set to ‘0’. I selected this image to print because of the small gap made by a someone who had just walked into the building. It allows the viewer to see the outside world and make sense of the photograph. 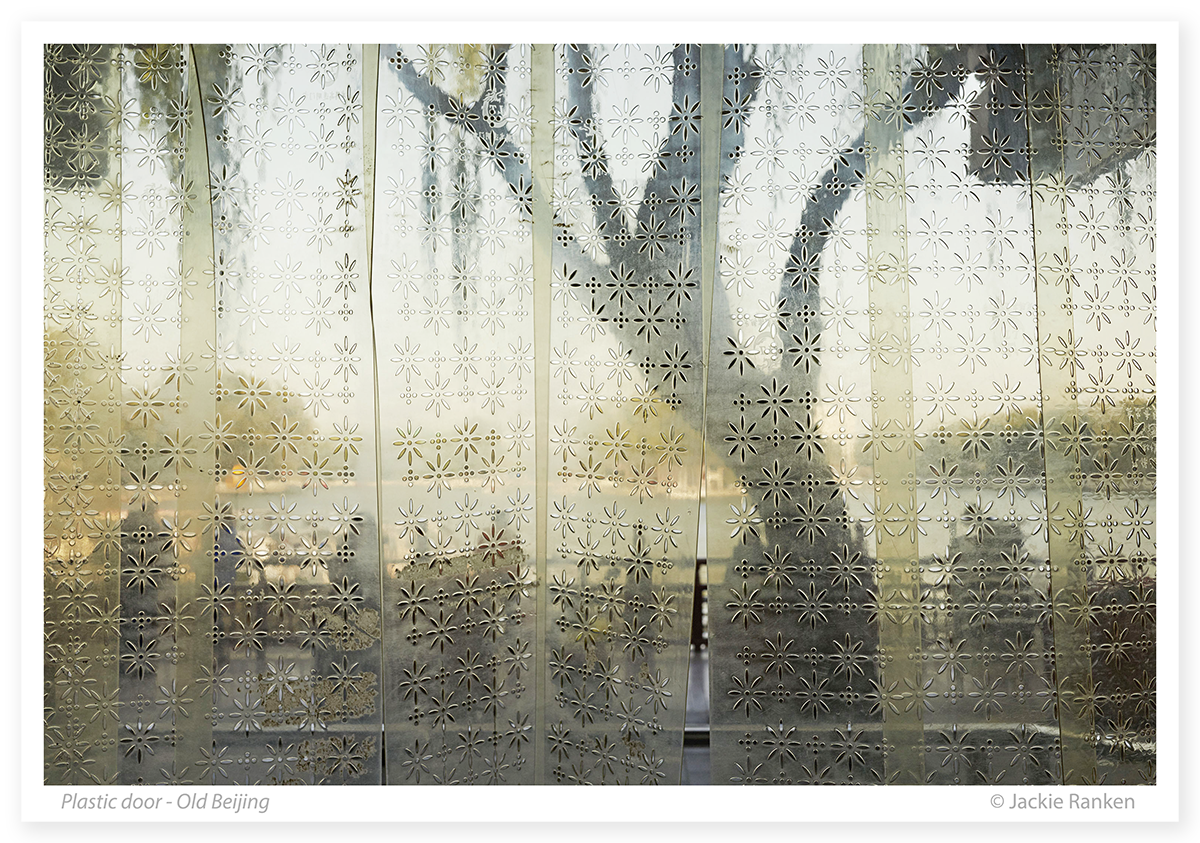 Mike and I were in China exploring the places along the Silk Road. The Xinjiang province offered the best chance for us to photograph famous sand dunes and Bactrian one humped camels. It was winter and the usual hordes of Chinese tourists were at home. This made this Tourist Park feel rather surreal. Equipment was wrapped up and the usual tourist activities were unavailable.

I walked around the site looking for interesting subject matter and waiting for the people who are in the scene to be in the right place, hopefully making a meaningful gesture and not merging with other shapes.

In the background of the shot you can see the footsteps of those who have walked up to the top of the sand dune. The place felt eerie, I was trying to capture this feeling and found that allowing the sun to shine around the edge of the foreground structure helped to emphasise this weird unreal looking place.

Whatever is in the viewfinder is the story that I want the viewer to read. All the elements are separated by space and easy to read. Hopefully this will engage the viewer to wonder about the image. 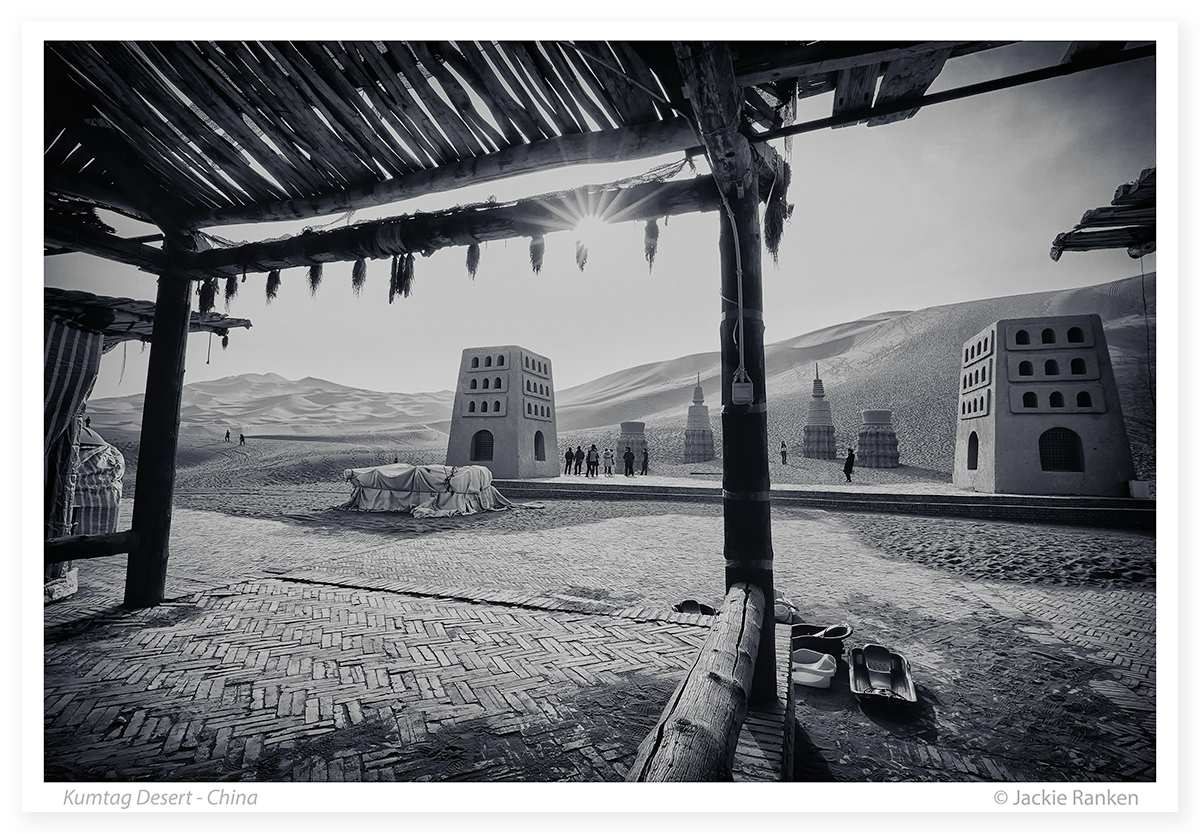 This print was entered into the NZIPP Iris Awards and the APPA Awards in the travel category, where elements are not allowed to be taken out or added.

Mike and myself were wanting to photograph the Bactrian camels that were the pack animals that serviced the ancient silk road route between China and the Mediterranean. We went to the Kumtag Desert Scenic Area to find them. We were on our way out of the Tourist park when we spied a driver with three camels in toe on his way to work (within the tourist park).

Mike pulled out a ten Yuan bank note and waived it in the air. The driver stopped and Mike gestured for the driver to walk around the sand dunes so that we could take some photographs. He didn’t speak any English but knew straight away what we were wanting him to do. The trick for us was to capture them in good light with a background that helped to tell the story of where they were. Within five minutes the driver decided that he had done enough and went on his way, in that time I squeezed off fifty eight frames following his path across the scene.

This is not an altogether unique image but I was pleased to make a classic shot that will remind me of where I was and what I saw and share this with others.

It takes practice to quickly set the camera up to achieve the best results. The best way to get fast and accurate with your technique is to practice whenever you can.

I chose a composition that included rolling sand dunes in the background and a shadowed sand dune in the foreground that helps to frame the shot. I like the open mouth of the lead camel because it shows his personality and can find no problems with over lapping elements that could create confusion. 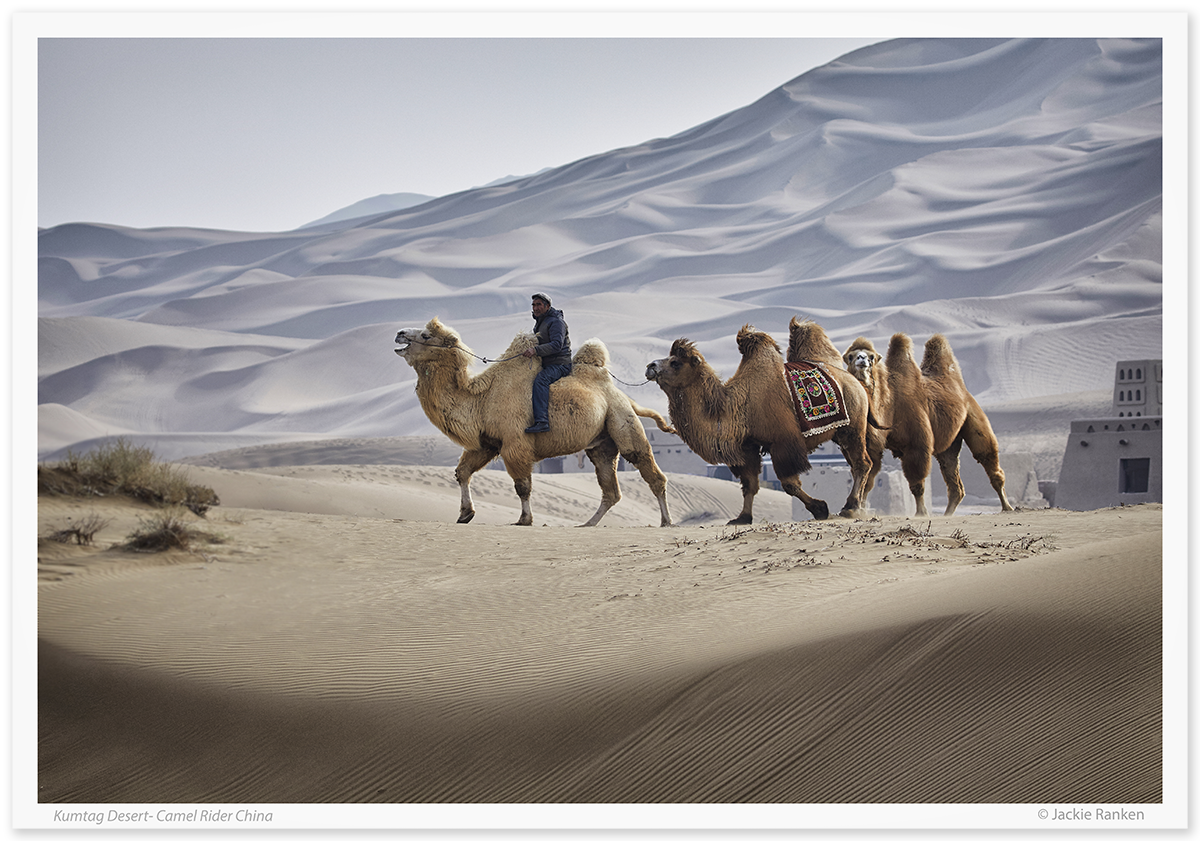 We arrived early to the Kashgar markets to capture the event before it became very busy. I was looking for images to tell the story of the famous market where sheep, camels, donkeys, horses, and cows from all over the district converge through the gates of the Bazaar to be sold.

Being early gave me space to make some portraits of the locals without too much clutter in the background.  This is an environmental portrait where all the elements within the frame add to the story. The central figure being a man who seems quite amused to have a white westerner taking his portrait. I love the gentle way he is touching his sheep and think that this is a signature of his personality. I like his sheep skin hat and the white tones in his beard.

I bent my knees to bring his head above the horizon line. I just happened to have my TS tilt shift lens on when I came across this fellow. I did not use its Tift/Shift mechanism to make this shot. We travel to places to ‘see’ their icons and what make our own visual records of what makes a place special. The challenge is to photograph often seen places in new and personal ways. 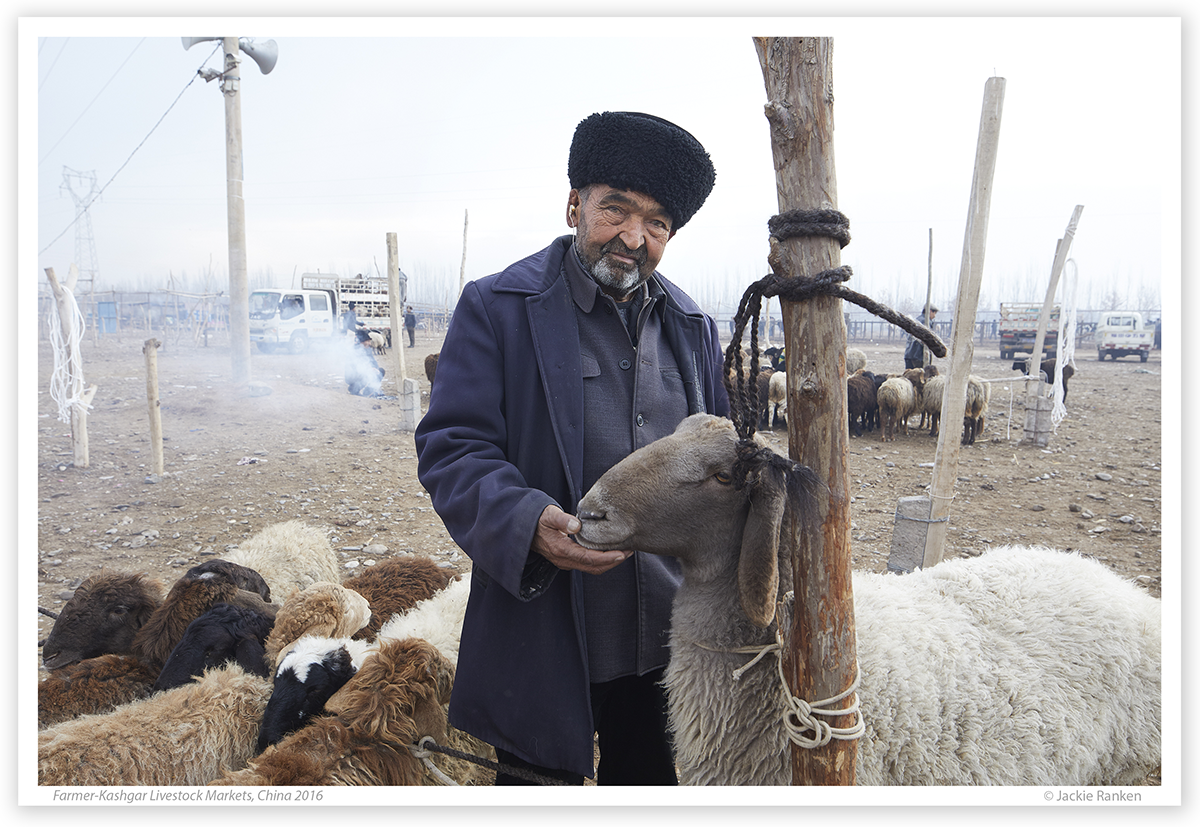 F8 was used to create a wildish depth of focus so that the elements in the background are reasonably sharp.

640 ISO was used because it was a little dark and I wanted to keep my shutter speed fast enough to stop camera shake.

We spent four days exploring the streets and urban landscapes of Kashgar in Western China.  On this afternoon, I spent over an hour in the one spot watching the play of light and waited for people to move through my frame.  My intent was to capture a decisive moment (while keeping the street light carefully composed in the space between the buildings).

The central Grandfather and child are the dominant subjects but notice all the secondary elements that add to the story. The boy with his foot off the ground and the man coming around the corner with his walking cane.

With the 24mm lens the depth of focus is wide enough to keep most of the elements within the frame sharp. 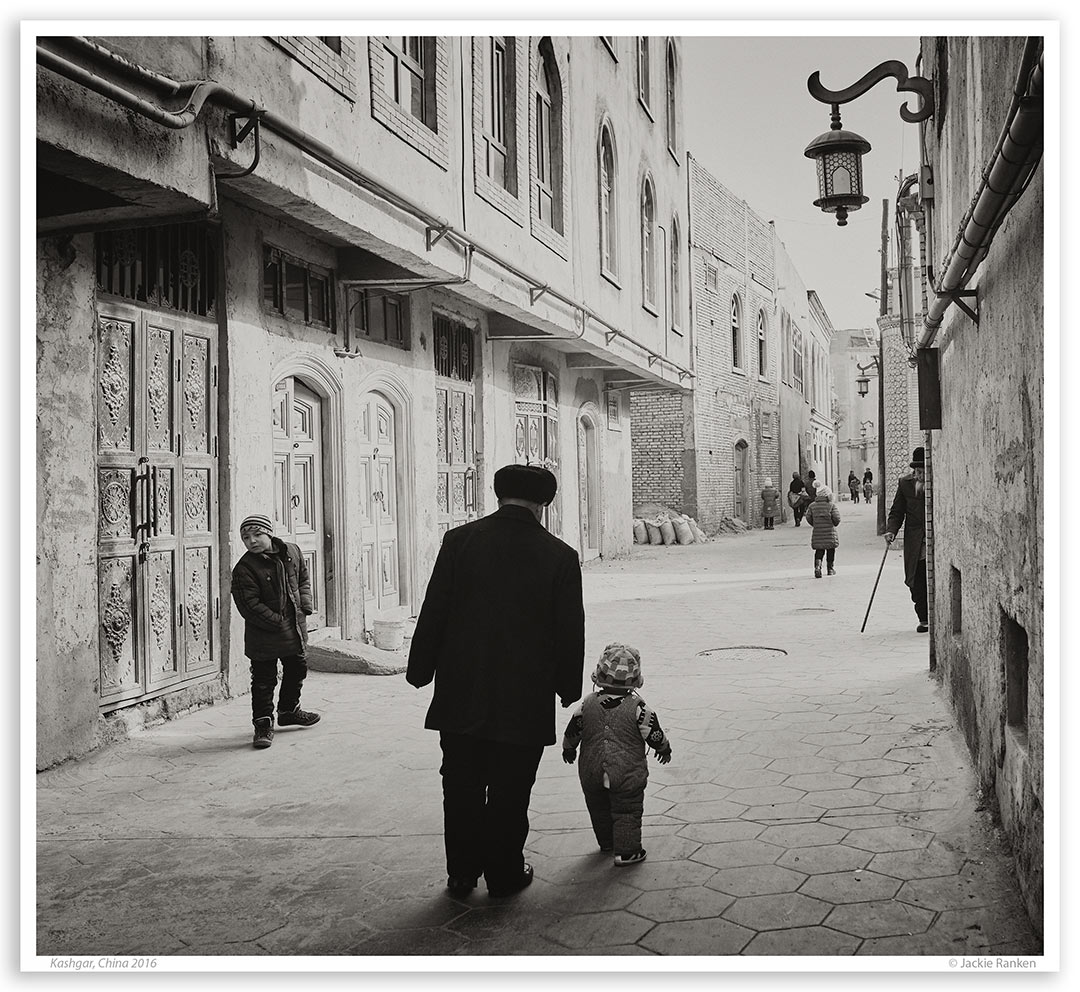 Find out more about Jackie Ranken and Mike Langford

Don't miss these inspiring stories
Filter by:
Please select the categories you would like to filter by: