Inside the World's Largest Cave: Jarrad Seng Discovers the Key to Creativity

One foot in front the other, edging further into the darkness. It's been my directive for a few days now, as we delve deeper into Vietnam's Hang Son Doong, the largest cave in the world.

I'm standing on a cluster of calcite rocks overlooking a mighty cavern, watching the rest of the touring party meander through the darkness, their head torches mere specks of light in the vastness. The scale is incredible. 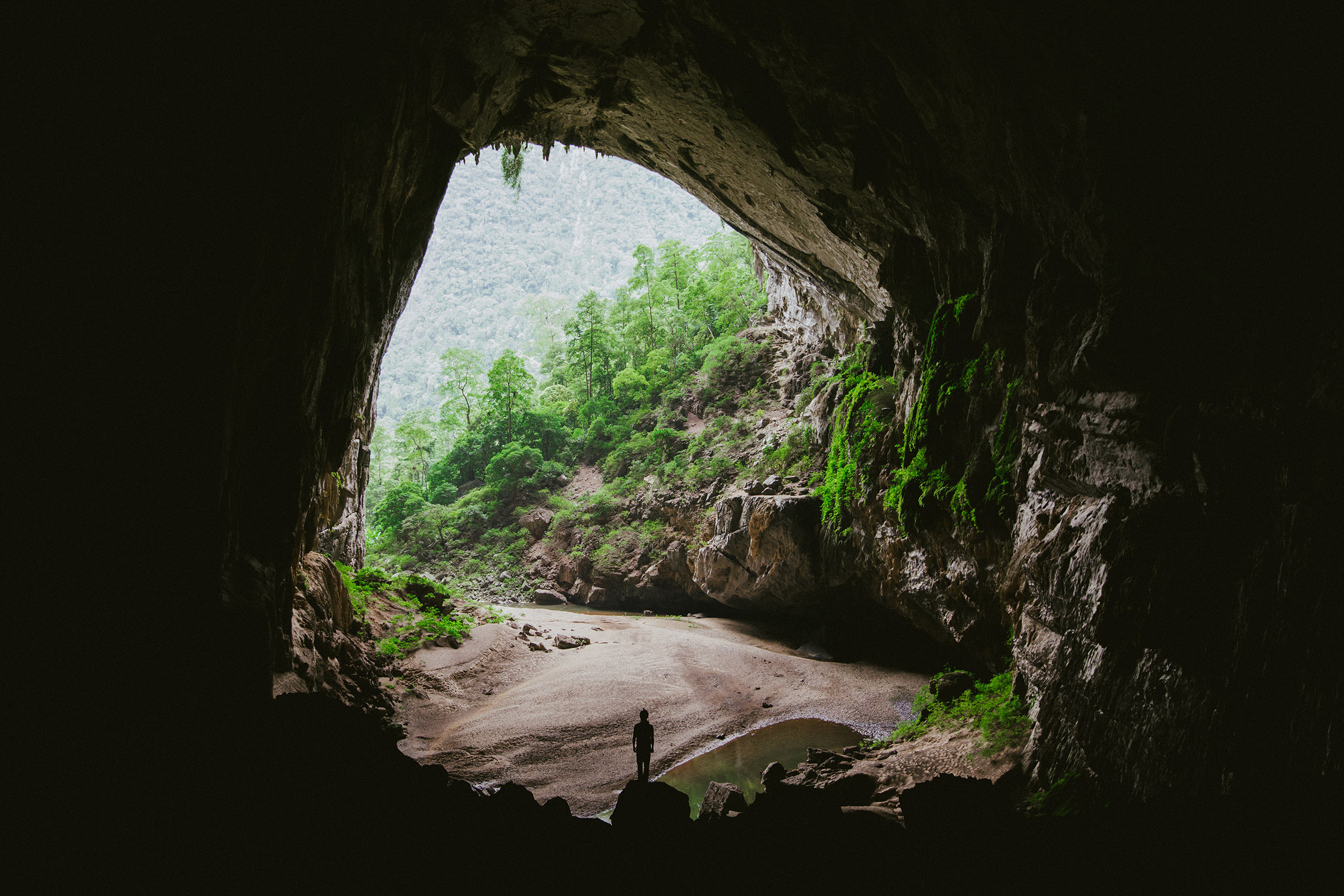 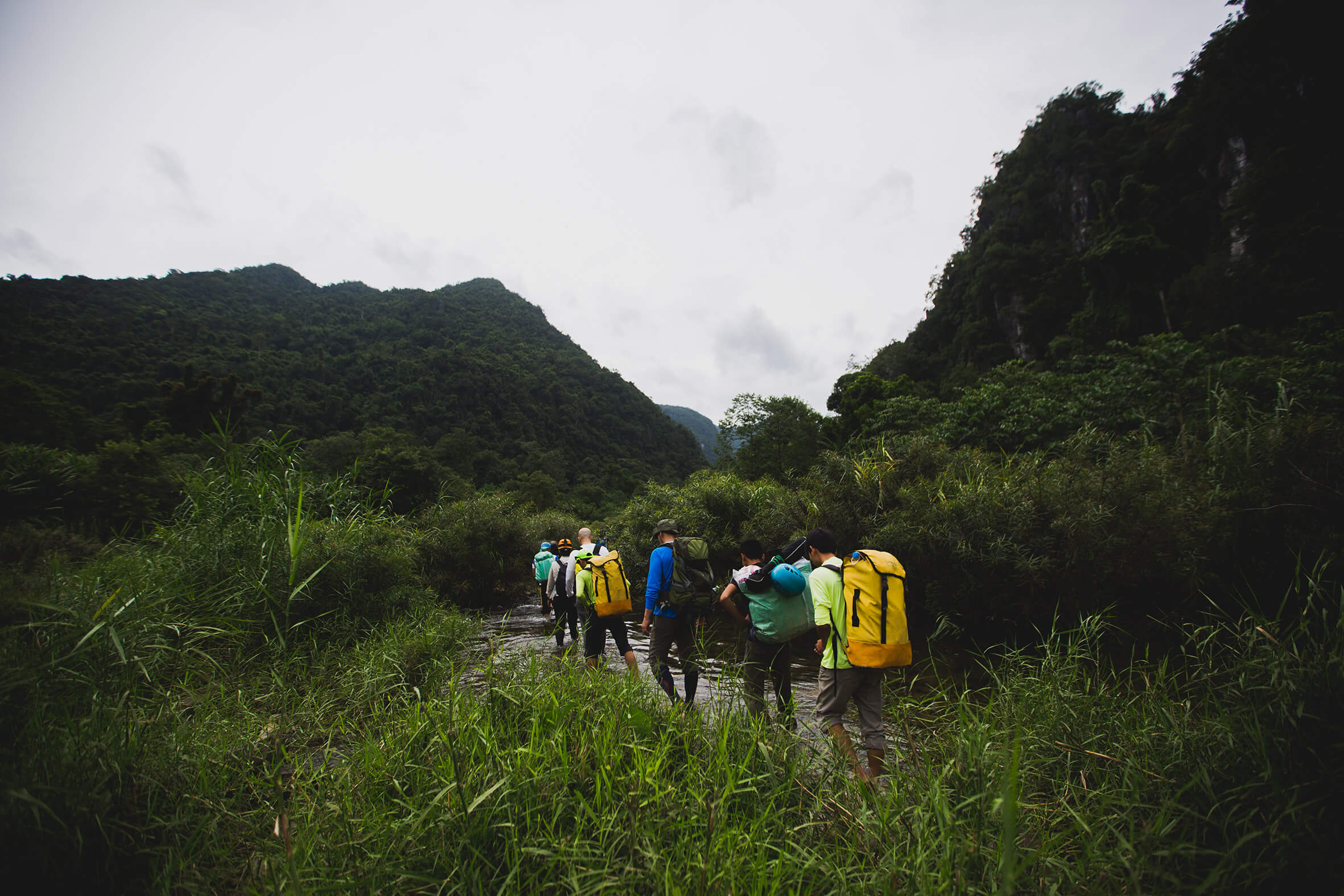 Hang Son Doong—or Mountain River cave—is one beast of a natural wonder. Discovered only in 2009, it contains its own weather system, underground cloud formations and a thriving jungle, all within its walls. The government only approved (very limited) public access in 2013. As a result, fewer people have stood inside this cave than on the summit of Mount Everest.

Ever since images started emerging of Hang Son Doong a few years back, I've known that I needed to experience it for myself, and capture it through my own lens.

However, as with all great adventures, there comes an equal amount of anxiety and pressure: the fear that I'm not cut out for the journey and the self-doubt that my photography won’t be able to do the incredible landscape justice.

But as we go deeper and deeper into the cave—and our days distil down to simply walking—something unexpected happens. The doubt subsides and a certain sense of clarity emerges with every passing step. What, on the surface, seemed to be a simple hike takes on new layers of meaning, and the cave becomes a metaphor for the complex road we take as creatives. 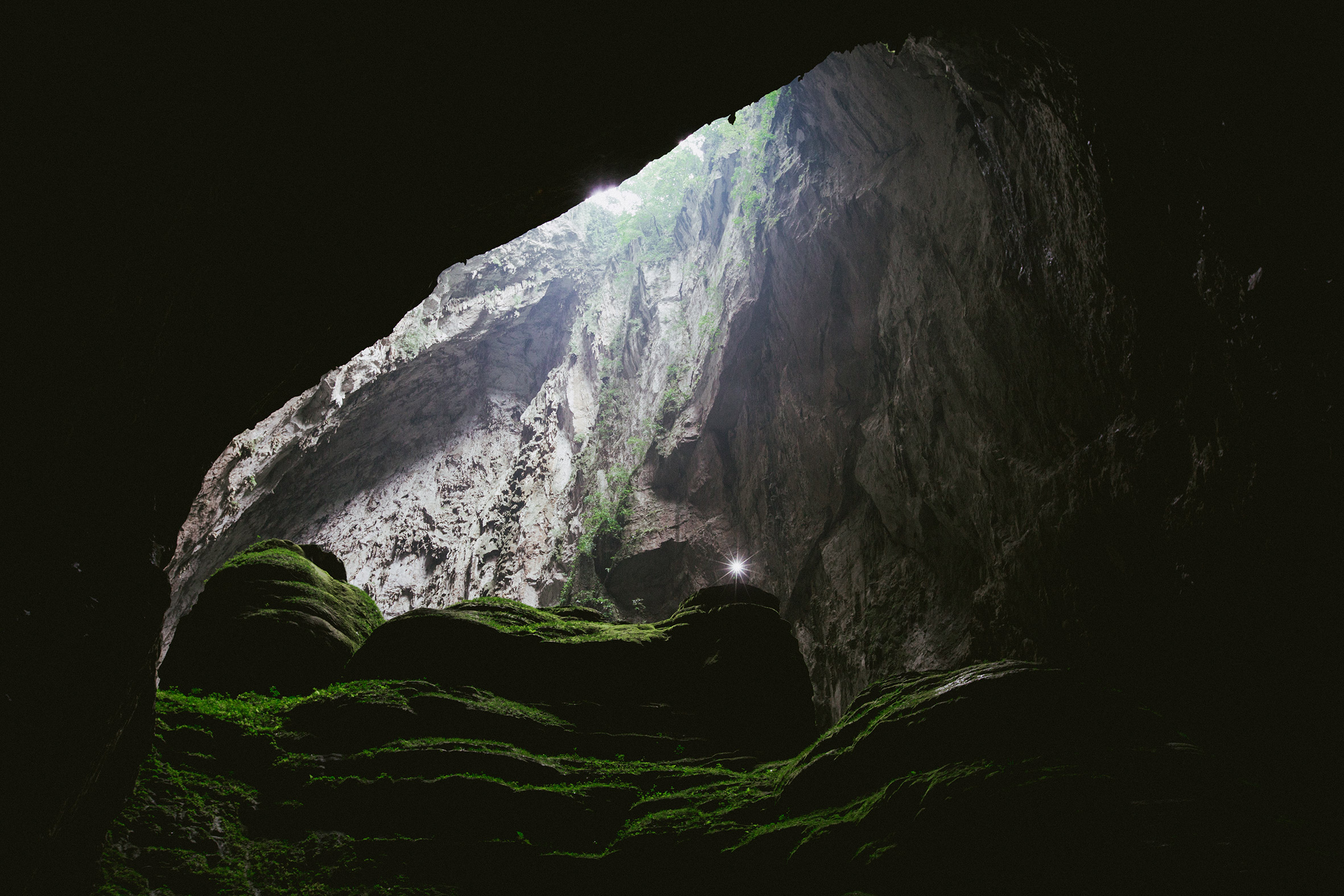 The excursion certainly isn't for the faint of heart. We spend the first day of the trek slowly making our way through steep jungle, crossing waist high rivers and streams dozens of times in the stifling humidity. As the hike progresses, we find ourselves scrambling down giant boulders, slugging it out through thick mud and pushing endurance levels to the limit on the endless ascents and descents along the contours of the cave. Every now and then we stop to pick off the leeches accumulating in our socks.

Though nothing was ever going to stop me from exploring this mighty wonder, the doubts started to creep in.

None of this came as a surprise, of course. We were warned about the difficulty beforehand by Oxalis, the only company with permission to access Hang Son Doong. The trek sits at the highest difficulty rating on Oxalis' caving chart, which was fairly ominous for this exercise-loathing traveller in particular. In fact, my application to join the tour was not even initially approved, which I can't say was much of a surprise given the kinds of answers I submitted - how many times do you go to the gym a week? Zero. How often do you run or cycle? Never. It didn’t exactly inspire confidence. That was the first alarm bell.

And though nothing was ever going to stop me from exploring this mighty wonder, the doubts started to creep in. 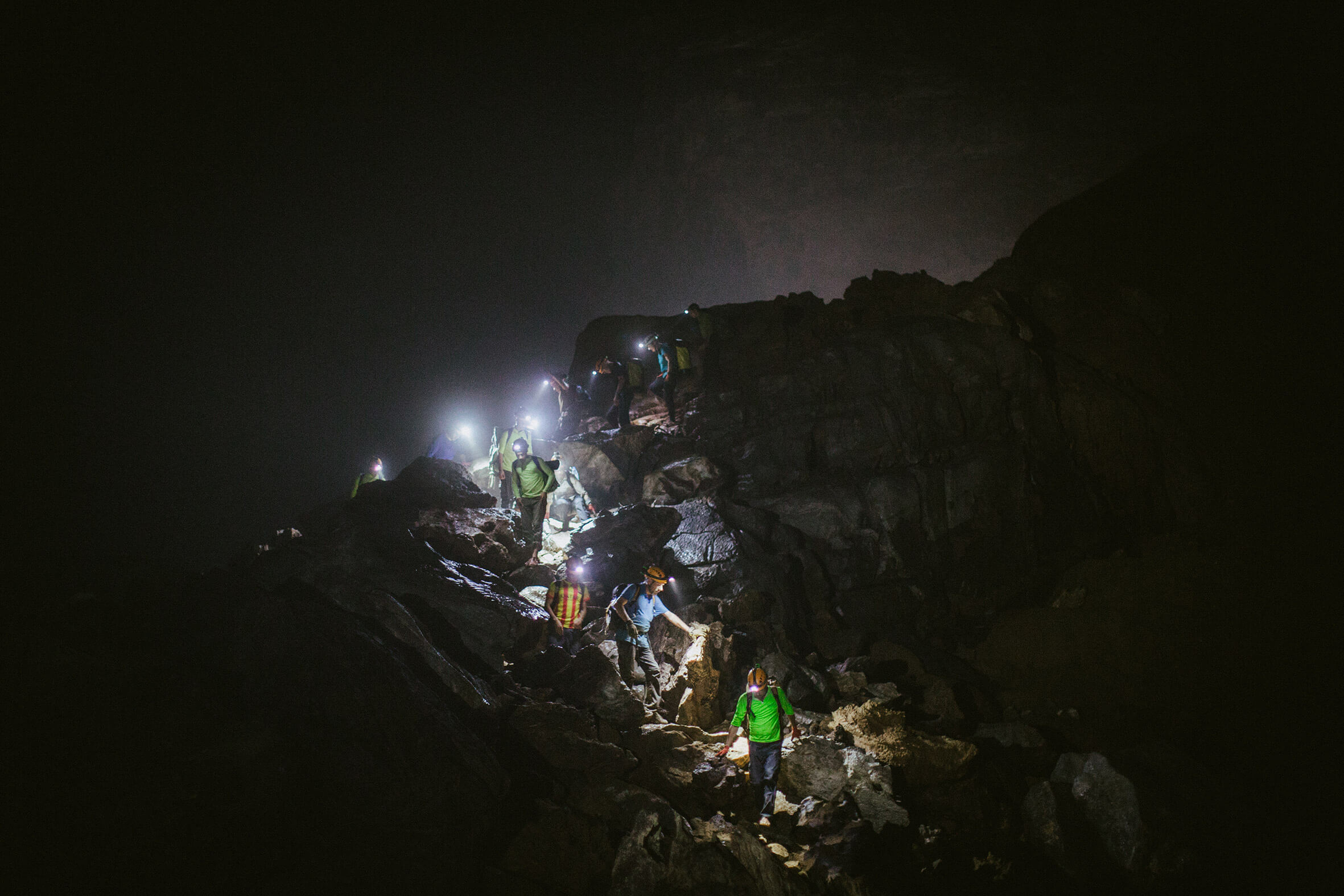 If there's one thing that overrides my disdain for exercise, it's my fear of humiliation. I'll do anything not to be that guy who holds up the group. So I started running. For the first time in my life, I started exercising. And approximately one minute into the first run, I remembered why I don't run. I get why athletes need to train for their own personal goals and their career. But, for me? Painful and boring. Not a step went by where I didn’t think how much happier I'd be sitting at home, watching Netflix.

Not a road went by where I didn’t consider cutting the corner and giving myself the tiniest of breaks.

But, that's when it all clicked. See, while working in a creative field, it's so much harder to grasp the concept of self-improvement through sheer hard work. When it's simplified down to a singular task—like running—it all becomes so clear. Why cut the corner when the only person you're hurting is yourself? If we quit every time it becomes uncomfortable, we'll never know what it's like to take that extra step, to stretch and learn, and push the boundaries. And it's exactly same when it comes to creativity—though often we don't see it that way.

We need to push ourselves everyday; we need to slog through the jobs, the boring tasks, and the tedious techniques that we're not comfortable with.

It's not always glamorous—trust me, I used to shoot nightclubs, weekly—but just by getting out there and getting work done we're growing, and hardening, and preparing for the next challenge. Every step you shy away from because of fear, or laziness, or lack of determination really does hold you back in the long run. Well, that's what I got out of exercising, anyway. 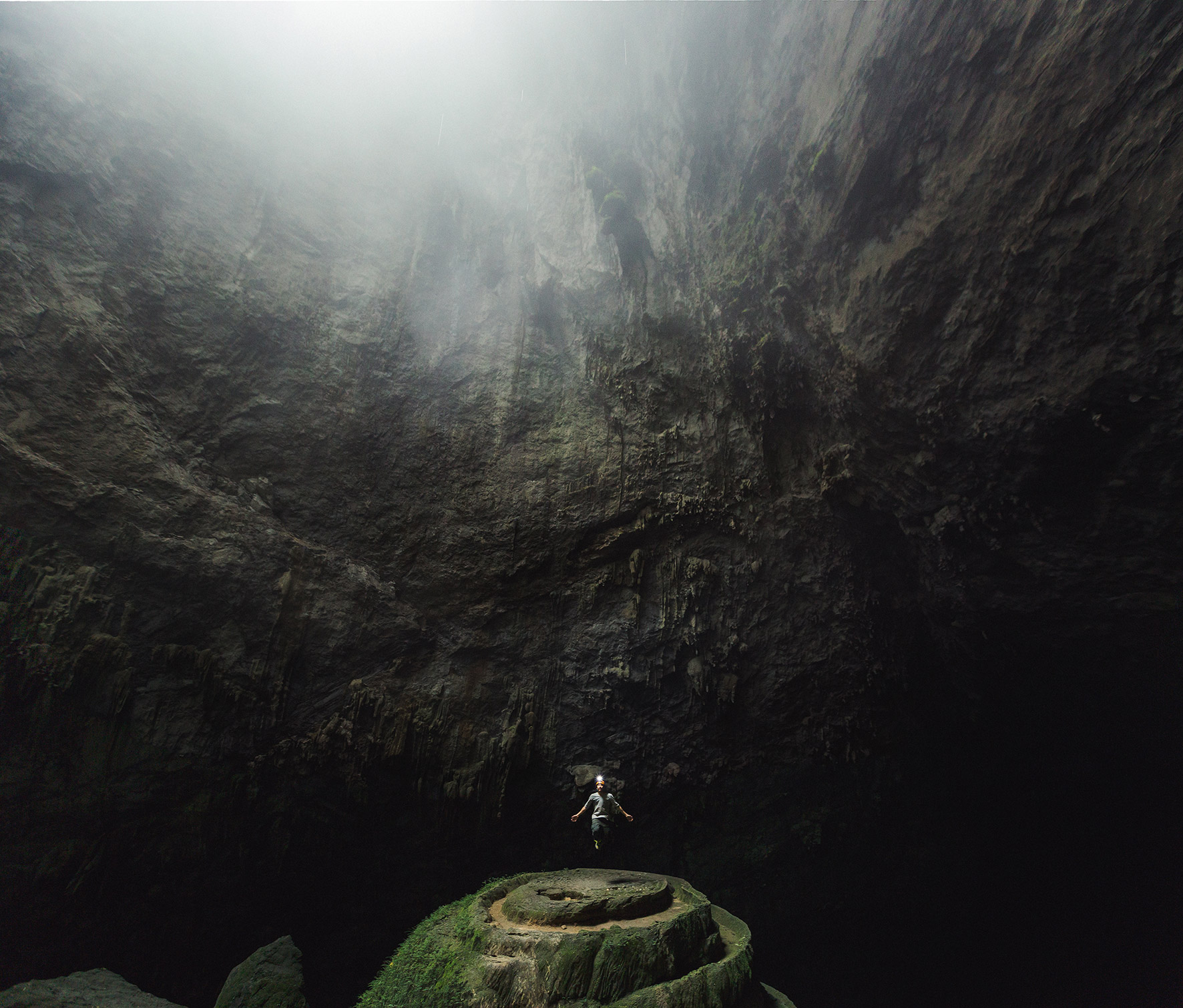 A cave termite scurries by—completely white, it's almost glowing. We're told that they've completely evolved inside the cave, making them a totally unique species. Clusters of cave pearls are strewn about under dripping water, formed over hundreds of years from layers and layers of calcite crystals upon the sand.

Photographing this sublime world— that so few have set eyes on—is a surreal feeling. Though it does come with it's own unique set of challenges - and I was right to feel intimidated at the prospect.

Trying to capture both the scale and the beauty of the cave becomes a daunting exercise in which photographic improvisation is key. 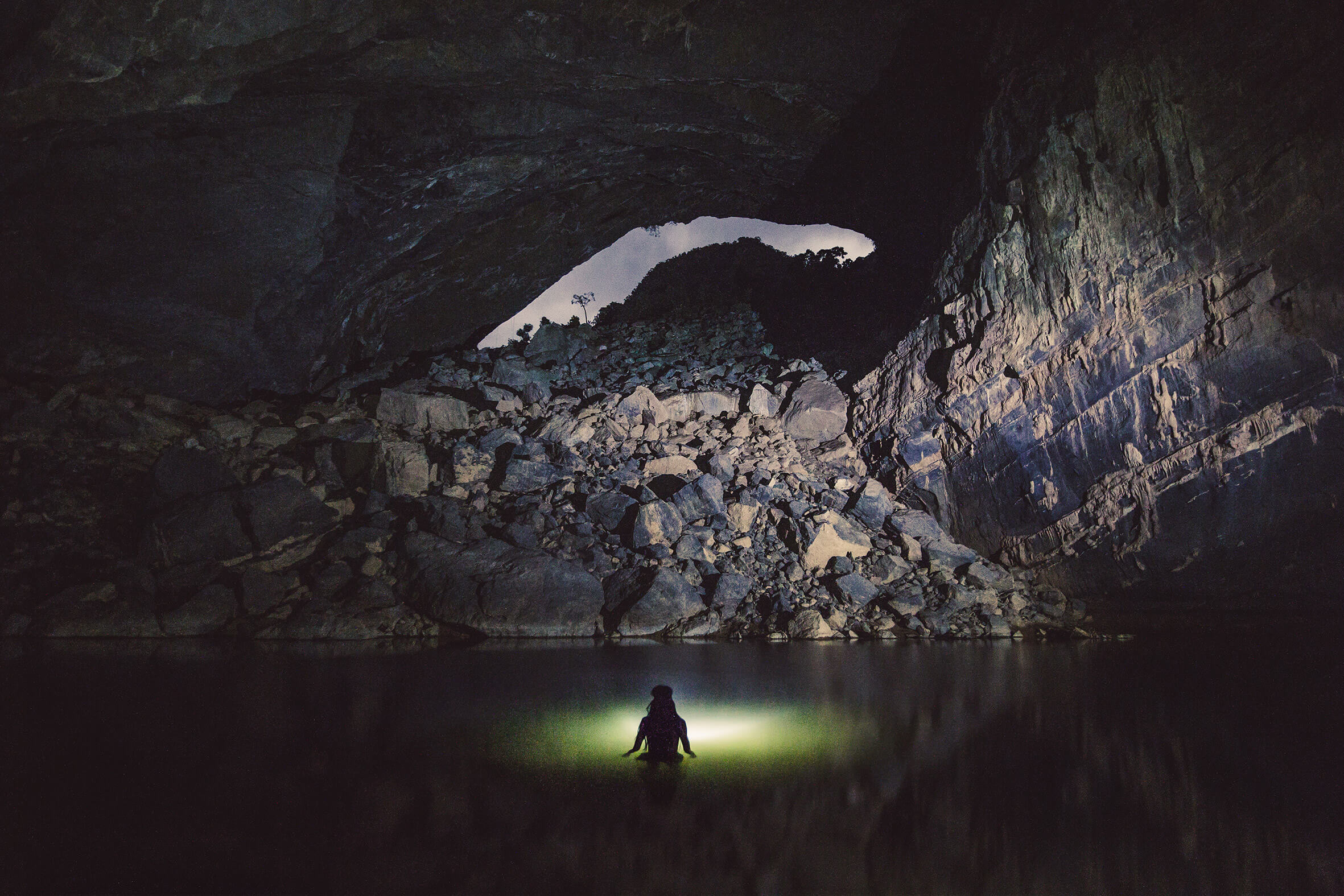 Most of the time we find ourselves in large stretches of complete darkness, though our campsites are based around the two large dolines—areas in which the ceiling of the cave has collapsed allowing sunlight to pour in from the world above—giving life to the vegetation below.

The need to simultaneously work with different forms of light—both natural and artificial—emerges as a constant challenge.

We use a combination of light sources—head torches, super-powered LED lamps, strobes and sunlight—anything at our disposal. Trying to convey both the depth and scale of the massive caverns is tricky, and requires a coordinated operation involving our guides and porters as human light stands and models - at times taking direction via radio from hundreds of metres away.

In addition, we’re careful not to cause any disturbance to the fragile ecosystem that’s made this place so special.

We’re limited to treading only across already established tracks, meaning that there’s a further constraint in being able to position the camera. Model direction, lens choices and creative use of lighting then became even more important in crafting the image. It's challenging, but here's where experience kicks in. I'm suddenly thankful for all those late night missions out in the field, fumbling around in the darkness, shooting portraits under the stars. 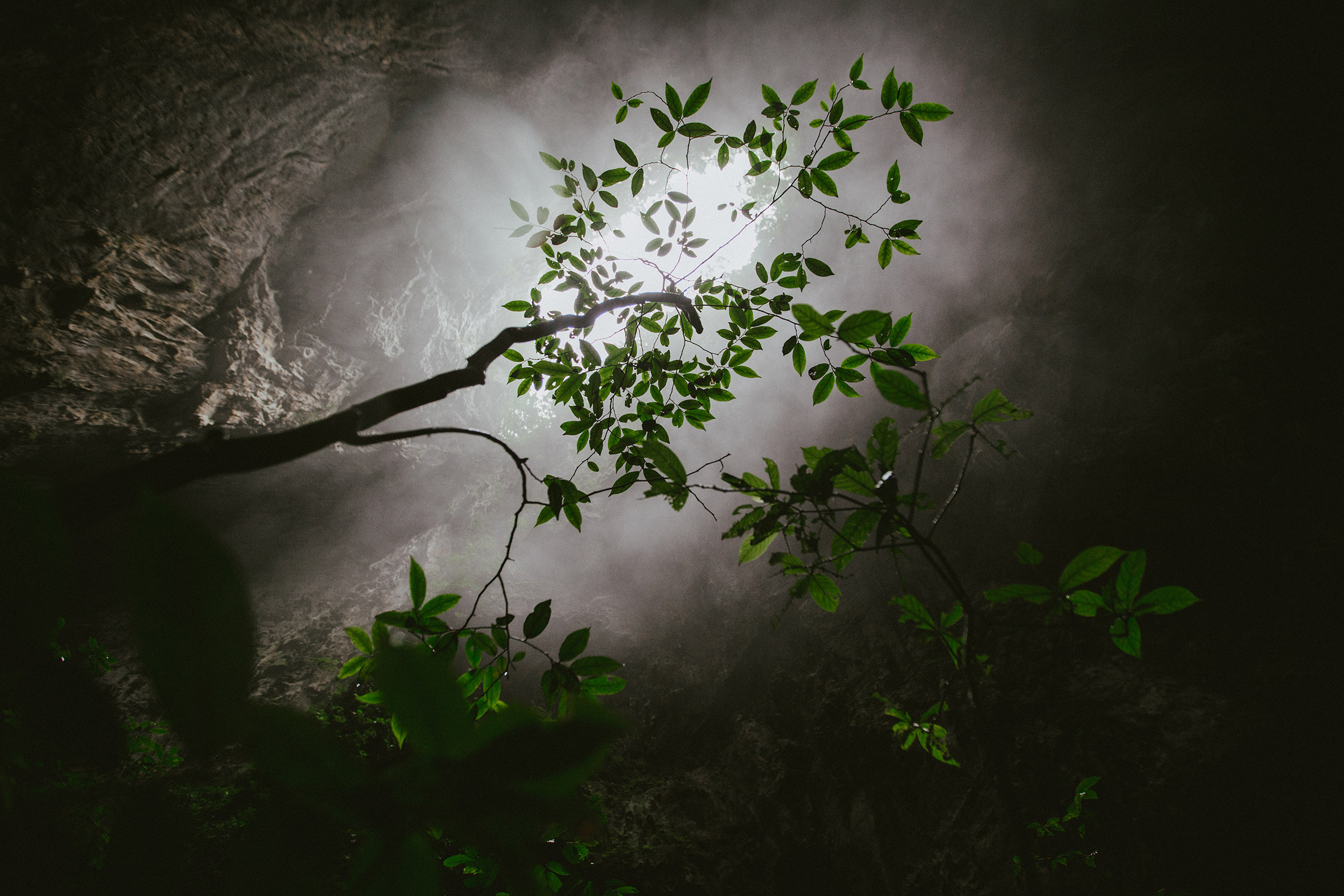 "Backlight him with the LED!"

"Get up on that stalagmite and hold still for 20 seconds!"

"Everybody - head torches on, light up the cavern walls!"

It's a mixture of walkie-talkie chatter, as well as good old-fashioned yelling across the vast expanse at each other. We take turns to set their creative agenda; all the while we click away, lost in our own worlds. As everyone slowly finds satisfaction with their shots, a silence starts descending upon the group, bar the odd drip of water hitting the calcite below. Those moments of silence are something I'll always remember from this trip. With the adrenaline of creating the photograph now over, simple appreciation of nature begins. 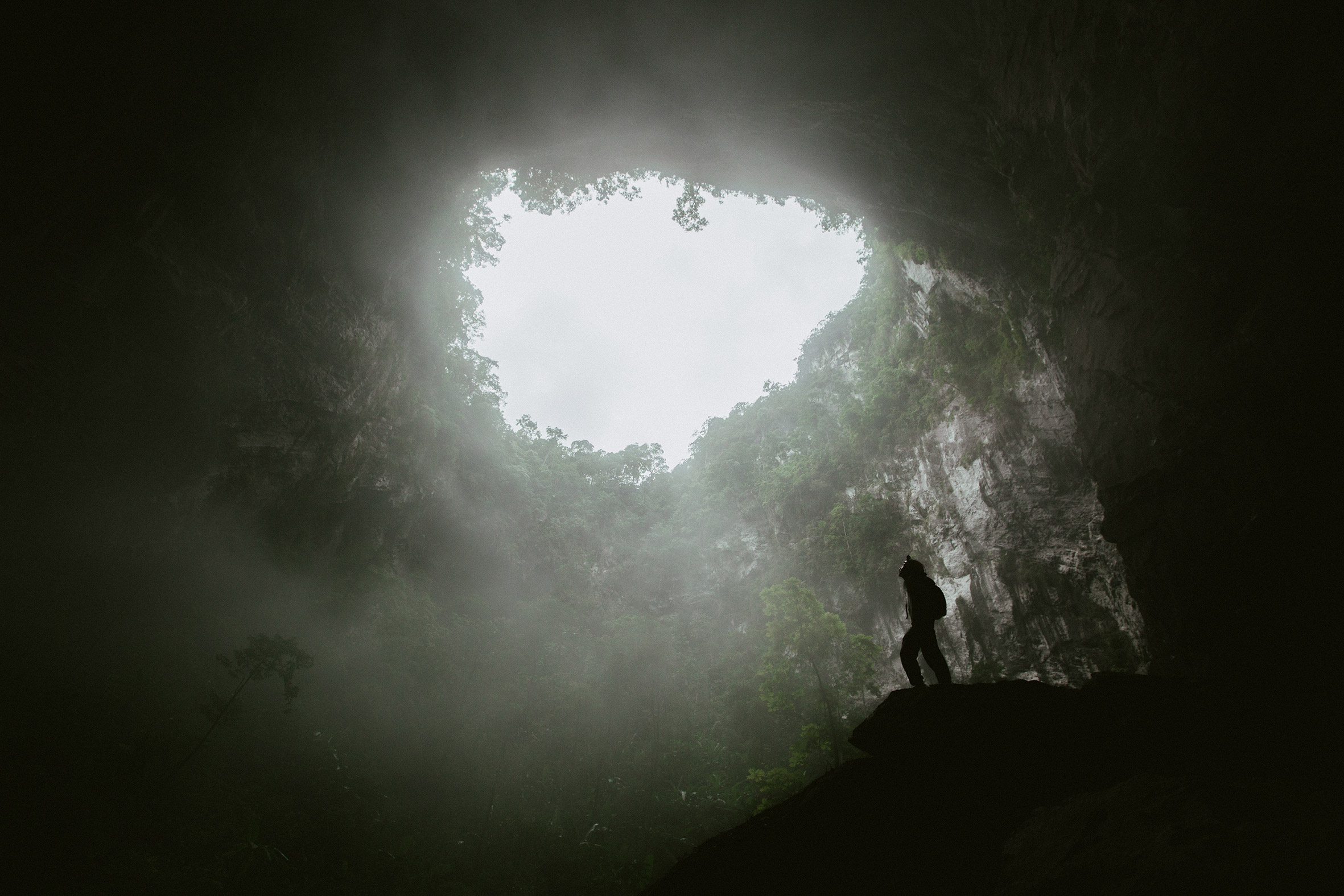 It's amazing what five days inside a cave can do to you. I'd been thinking about this trip all wrong. The cave wasn't the daunting, anxiety-inducing monster I'd been imagining this whole time. Rather, it was the antidote; an unexpected way of re-aligning myself with my motivations and goals; a chance to self-audit and put my creative journey into perspective.

Rather, it was the antidote; an unexpected way of re-aligning myself with my motivations and goals; a chance to self-audit and put my creative journey into perspective.

Oh and the whole running thing; turns out I really didn't have much to worry about. Sure, it was tough trek, but I'd underestimated myself by a long shot. I'd been training for this hike for years without knowing it. All the previous photography adventures, the getting-up-before-sunrises, the midnight trekking, the miles spent exploring foreign cities on foot, the jumping from airport to airport. Sure, I don't know what it's like to get on an exercise bike or step foot on a treadmill, but I sure as hell know the feeling of lugging a twenty-kilo camera bag up a mountain.

All those struggles—all the things I already did in pursuit of epic photography—prepared me for this. Not only physically, but creatively too. And I think that's something to always remember.

Just by turning up—just by doing it and putting one foot in front of the other—is progress. It may not seem like it at the time, but every day spent pursuing your craft is an opportunity to grow and learn. And before you know it, you're in the remote Vietnam, shooting sunbeams blast through the middle of the world's largest cave. Step by step. 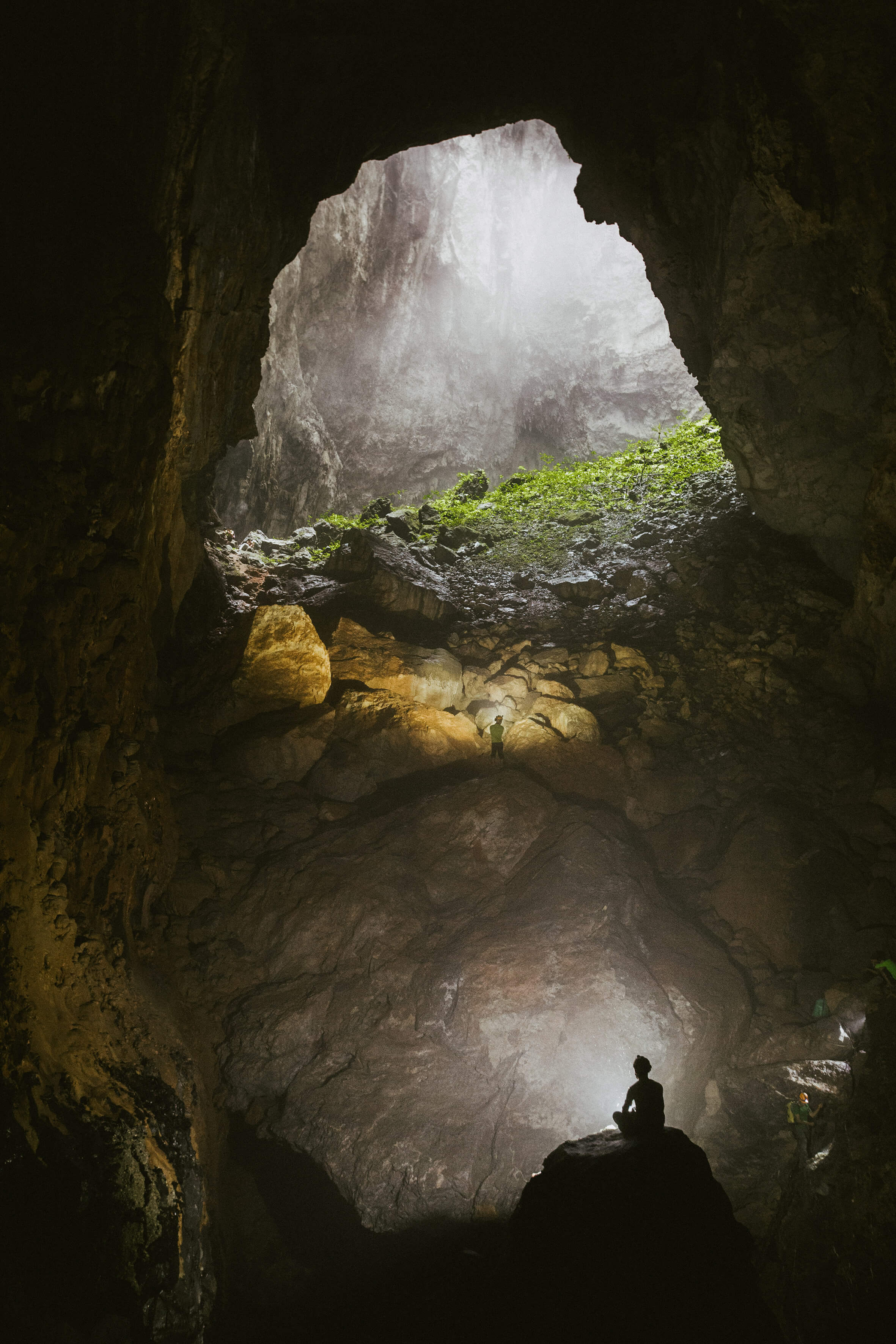 Article and images by Jarrad Seng.
Back to Stories
Don't miss these inspiring stories
SHARE THIS PAGE