Working Hours Around the World

How does Australia stack up? What does it say about us as a workforce?

No, it’s not a soccer world cup result, but the figures about working hours around the world. The data, from the Organisation for Economic Cooperation and Development, makes for interesting reading.

It compares, by country, the hours per worker per year.  The results show a very marked difference between lowest and highest: at the top end of the scale, Mexican workers spend 2257 hours a year working, whilst their German counterparts come in almost 40% lower, with an average working year of just 1356 hours. 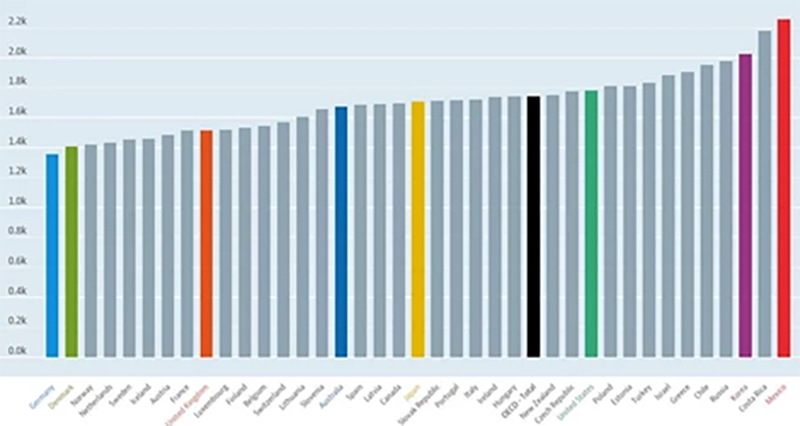 Where do we, in Australia, fit into this scale of working hours?

The answer is that we are firmly in the lower half of the scale. Our 1676 hours per worker per year, puts us 16th (from the bottom) out of 39 and one third along the scale in terms of hours worked. We have the lowest working hours of any of the non-European countries surveyed.

So what inference can we draw from this? What does it say about Australia’s working culture, our economy and our lifestyle?

To answer this, let’s take a look at some of the underlying factors that drive working hours.

The drive to high hours

There is certainly a school of thought that believes that the longer you work, the better an employee you are and the greater your chances of promotion and recognition. We’ve all come across those who proclaim loudly and frequently the number of hours they work, and see it as a source of pride.

In countries like Mexico, high unemployment rates drive a fear amongst workers that they may lose their job to someone who is willing to work longer hours, and lax labour laws often fail to enforce rules around maximum hours.

Long hours may be encouraged by Government, as a strategy to boost the economy, as in Korea and Japan and in many countries and working cultures there is a long held belief that longer working hours equates to greater output and that time equals productivity.

In the countries with the lowest figures, these factors are not present, or are diminishing. Even Japan (which even has a word, ‘Karoshi’ meaning ‘death from overwork’) and South Korea have now recognised the dangers of working long hours and are taking active measures to reduce them. In Korea, concerns about social problems, including a low birth rate and slowing productivity, has led the president to push a reduction in working hours and the notion of a worker’s ‘right to rest’.

OECD data shows that average working hours reduced between 1990 and 2012, and the two countries with the biggest drops were Japan and Korea.

Research on productivity shows that it is not directly correlated to the number of hours worked, and that the opposite can be true and longer hours can actually be counter-productive.  A case in point is Germany, at the bottom of the working hours scale, whose workers are 27% more productive than their UK counterparts, despite the latter working an extra 158 hours a year.

The concept of ‘presenteeism’ is growing in understanding and acceptance – that is, that many workers do not take necessary sick leave, and whilst they may be physically present at work, they actually drive down productivity because they are not delivering. The need for adequate leave for physical and mental illness is understood and encouraged in highly productive workforces.

What does this say about Australia?

It seems clear that the lower end of the scale is the place to be – Danes, who have the second lowest working hours, have the best work life balance and highest overall life satisfaction of all the countries surveyed by the OECD.

Our position, towards the middle, and in the lower half of the scale, reflects our ‘lucky’ country status to a certain degree – we don’t have high unemployment, we have strong labour laws and we recognise the importance of physical and mental health.

But neither can we rest on our laurels – there are still improvements we could make in productivity, recognising and counteracting presenteeism and in putting the final nail in the coffin of pride in long hours.

Because this is one league table where Australia wants to come out at the bottom!