Sossusvlei and the Dunes of Fire

There are some things I’d never imagine would ever happen to me.

It’s difficult to set the scene, and if it weren’t for Jay Collier and Emma Desira from Canon Collective—and visiting photographer Hougaard Malan—who can vouch for me, you’d think I’m re-living a weird dream.

We were driving across the Namib Desert near Sossusvlei, Namibia, with the world’s largest sand dunes either side of us. Our driver, Etosa, was wearing a bright red t-shirt emblazoned with “Ladies Man” and a picture of Homer Simpson in his underwear. For some reason he was grinning ear-to-ear as he drove, playing the worst Swahili elevator music mix I’ve ever heard. Thankfully someone spotted a lone Oryx walking in front of one of the dunes, giving us an excuse to stop and escape the car.

For the uninitiated, an Oryx is best described as a big antelope—best eaten rare. But they’ve got a nasty side; they’re known for a temperament that not even a lion would challenge. 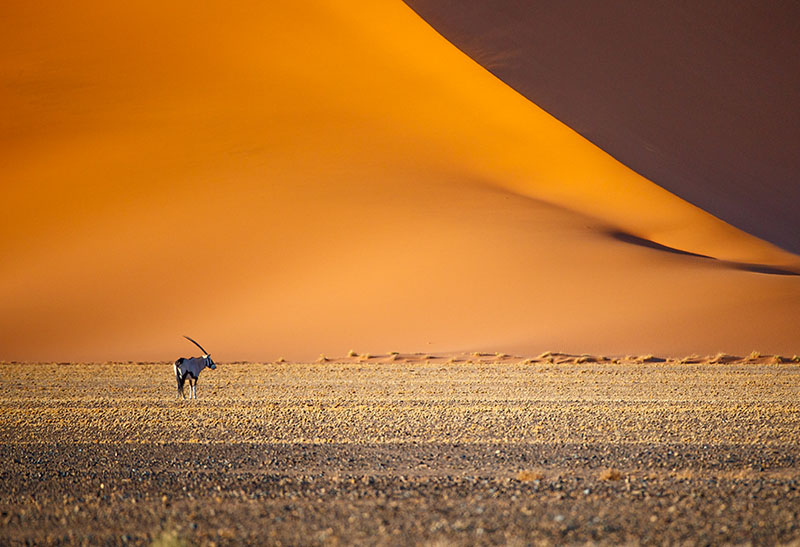 Jay and I jumped out of the car—cameras in-hand—and started to make our way towards the Oryx. Hougaard followed behind us but at a distance, knowing that with a good start he could outrun us both if the beast got a little feisty. Measuring distance in the desert is hard: something that looks roughly 500 metres away is more likely one kilometre off. So after about two kilometres of walking, we finally managed to get close enough to shoot.

Emma stayed back near the car. I think she was secretly hoping she’d get that award-winning Nat Geo shot of two photographers getting chased—and run over—by an Oryx. Either that, or she liked the music. 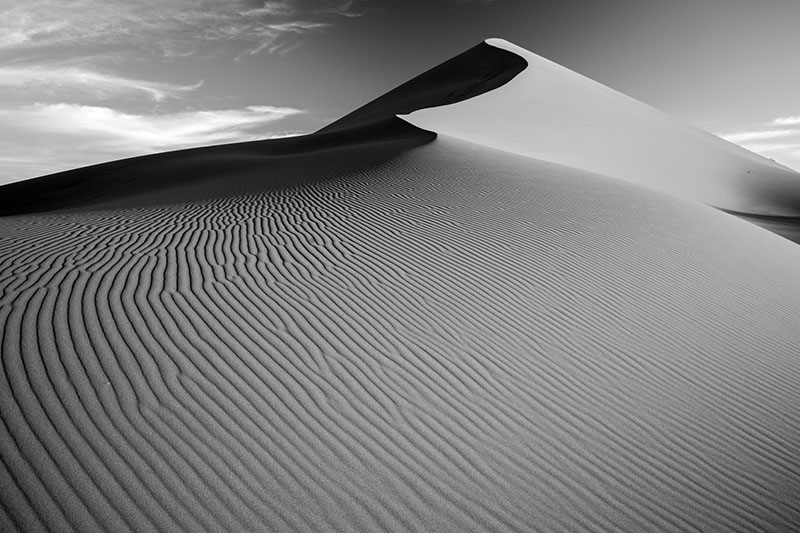 This particular day marked the halfway point of our trip to Namibia. It was a bit of an odd time; many of us had started to feel the effects of nine-hour drives, shooting until midnight with 6am starts—not to mention the party at Deadvlei the night before. I was the only one to make it to breakfast that day, so I had the morning session to myself with three of the best photography guides you can imagine.

We left the Oryx; satisfied with the haul of images we’d captured we jumped back in the car and pressed on. Before long Houggard stopped us at “Dune 45”— a massive sand dune named for it’s position 45 kilometres down the road that connects the Sesriem Gate and Sossusvlei.

The wind picked up; the sand was swirling in every direction you could imagine. The dunes around us came alive, and lit up like they were on fire.

The swirling sand took on the appearance of the cruelest of bushfires, with flames reaching hundreds of meters into the air. There were four of us shooting the same image that morning, but we all managed to capture different pictures as the sand’s shape and form was so random it was impossible to shoot anything identical. Since returning home I’ve wondered how a simple public servant made it to Namibia as a guest of the Canon Collective. The trip has actually changed my live forever.
Alistair McBurnie was the overall winner of the 2016 Canon Light Awards photography competition. His prize was a photographic tour to Namibia with the Canon Collective. Find out more about the 2017 Canon Light Awards LIVE here.